Antarctica: The opportunity to sail off the planet into another universe

When you want to embark on an adventure to a remote area of the planet, it’s best to ask the experts, and let them show you the way. In this occasion, we’ve had the opportunity of interviewing Albatros Expeditions Lecturer and Expedition Guide Thomas Bauer during his visit to our Copenhagen Headquarters.

Thomas is an Australian of Bavarian origin. He is a Fellow of the Royal Geographical Society, London and also a Fellow of The International Centre of Excellence in Tourism & Hospitality Education. His Ph.D. thesis dissertation investigated commercial tourism in Antarctica (1991-1998). Later, it was published as a book entitled, Tourism in the Antarctic: Opportunities, Constraints and Future Prospects. Thomas also filmed and produced, Voyage to Antarctica. So who better to ask than Thomas, about this remote seventh continent?

Thomas, what makes a good expedition?

-A good expedition is one where guests get to enjoy the scenery of the Polar Regions, where they have comradery on board and where they have colleagues of mine who are sharing their expertise of Antarctica or the Arctic.

You’ve been to Antarctica on 35 occasions, which is more than most people will experience in their life. You’ve been there as a guide, a historian, as a researcher, and performing other many roles. What’s your connection with Antarctica? Why does it keep drawing you back?

Every year I want to go back because every expedition that we make is different than the last one. We might have been to a place a week ago, but the scenery changes, the wildlife changes, the climat changes, the weather changes, and every single time is a new experience. 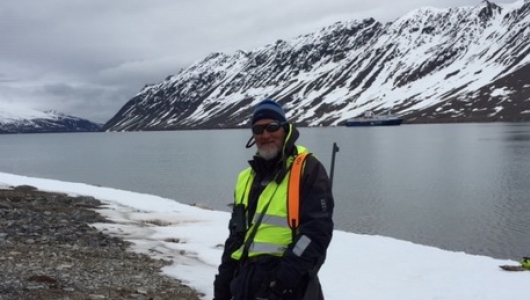 What factors do you think guests should consider when choosing an expedition to the Polar Regions?

-They should focus on the time of year when they’re visiting, because of course, in Antarctica, if you’re going early the penguins still sit on eggs, whereas if you go later, around Christmas time, January, they already have the young chicks, so it’s a different experience.

Of course, as we know, the Antarctic is highly unpredictable. There are no guarantees of making landings, as we’re always at the mercy of the winds and the ice.

Would you please share an experience as a member of an Expedition Team that influenced your life or your perspective of the world?

-Well I have a cumulative impact story. Because the beauty of the Antarctic, and the pristineness of the Antarctic, over the many years that I’ve been visiting it, led myself and my wife, back in 2003, to buy conservation land in Australia just to protect it. No commercial interest whatsoever. Only to protect it. So the Antarctic inspires this in people, and I’m trying to pass it on to our guests when I give lectures on the ship: From the Ice to the Rainforest, and From Words to Action, because people talk a lot about environmental conservation but few do anything about it, so the Antarctic really has inspired me to do my bit to protect the planet.

What advice would you give to guests planning to visit Antarctica for the first time?

-Don’t overpack. (laughs) It’s not as cold as you think it might be. Ordinary winter clothes that you would wear in Europe or in North America or in China, is perfectly adequate. Prepare yourself. Don’t be afraid to cross the Drake Passage. Sometimes its bad, but most of the time, it’s not so bad. I’ve been across it 30 or 40 times, most of the time it’s not that bad. Don’t think you can’t go to Antarctica just because there’s the Drake Passage.

So it’s really not that scary?

-No, it’s not that scary. The Drake Passage is the rite of passage to Antarctica. You have to go through it if you want to see it.

And then you get the bragging rights?

-And then you get the bragging rights for life, that’s right.

“I invite you to visit Antarctica, because it is the most beautiful part of the world. It’s the opportunity to sail off the planet into another universe. As you cross the drake passage and as the Antarctic peninsula appears in front of you, it is an amazing experience. I’ve been 35 times and I’m going back this coming season, and I’ll keep going back year after year, because there’s nothing like Antarctica anywhere on the planet. Welcome aboard! 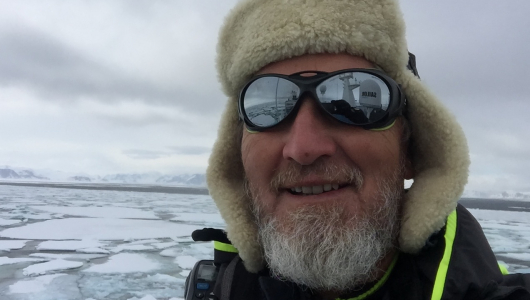 Thank you Thomas Bauer, for this interview and sharing your expertise with us.

Thomas is an Australian of Bavarian origin. He is a Fellow of the Royal Geographical Society, London and also a Fellow of The International Centre of Excellence in Tourism & Hospitality Education. He has audited hotel and tourism schools in Austria, China, Dubai, Fiji, Holland, the Philippines and Thailand. His Ph.D. thesis dissertation investigated commercial tourism in Antarctica (1991-1998). Later, it was published as a book entitled, Tourism in the Antarctic: Opportunities, Constraints and Future Prospects. Thomas also filmed and produced, Voyage to Antarctica.

Thomas has travelled extensively in some 75 countries and on all continents. Since his first voyage in 1994, he has visited Antarctica on 35 occasions as a guide, historian, naturalist, presenter, researcher, photographer, and Zodiac driver.  In the 90s, Thomas was lecturer, senior lecturer and Associate Professor in tourism at Victoria University in Melbourne. From 1999 to 2012, he was Assistant Professor of tourism in the School of Hotel and Tourism Management at Hong Kong Polytechnic University. Today, he is an Adjunct Professor in Sustainable Tourism at Central Queensland University.

Thomas and his wife, Lina, are the owners of a large rainforest property in tropical Mission Beach, Far North Queensland, Australia where they have established the Mission Beach Butterfly Garden.