VIKINGS OF THE NORTH SEA

Expedition voyage following in the wake of the Vikings from Denmark to Scotland.

Join us on this expedition cruise across the North Sea, embarking from a pier in central Copenhagen. We will visit the small scenic town of Skagen, at the pointed ‘top’ of Denmark where many famous Danish artists once resided together in an artists’ colony. Continuing into open sea, we make a call to the west coast of Norway, a stronghold for fierce Viking warlords over a thousand years ago. The Viking Sagas tell us that Haugesund was the burial place of Harald, the first Viking king. We will make a visit to his monument in this quaint seaside town. We continue in the historical Viking slipstream across the sea towards the British Isles, whilst imagining how these brilliant skippers braved and navigated the same waters towards the unknown.

The Shetland Islands, like neighbouring Orkney, was once ruled by Vikings. They came across the North Sea with a reputation as fearsome warriors, but surprisingly they settled down and became farmers for the next 500-600 years, leaving a lasting imprint of Norse placenames, daily expressions, and traditions.

Our new expedition vessel Ocean Albatros will be our home for this unique cruise. She is a revolutionary and stylish small ship that combines exquisite comfort with modern technology as well as unique stability in rough seas. Ocean Albatros can accommodate 188 guests in 93 cabins/staterooms. The elaborate design, together with fantastic service from the staff, provides an intimate atmosphere on board.

An example of a typical danish open sandwich

Grenen, the northernmost point of Denmark

WWII bunkers adorn the western and northern coastline of Denmark

The so called "Sandworm" bus, takes guests all the way to the "end"

Seals are known to hunt around Grenen in Skagen

Haugesund, town of seafarers and vikings

The first viking king of Norway looking over Haugesund

The coast of the Shetlands

Whisky or Gin tastings are available

The cruise begins in the heart of Copenhagen, where Ocean Albatros is moored. After embarkation and mandatory safety procedures the lines are cast and the captain sets a northbound course out of the Sound. You will be shown to your cabin, and the mandatory security procedures are carried out. While dinner is served in the elegant restaurant, we will pass the castle of Kronborg, made famous by a certain Hamlet!

We start the day with a coach tour to Grenen, the pointed peninsular marking the northernmost point of Denmark. Join the tractor-bus called ‘Sandormen’ and see where the waters of Skagerrak and Kattegat meet in culminating waves. Always a popular excursion for Skagen visitors.

After the visit, we take a leisurely city walk, which includes Skagen Art Museum, where visitors will see the permanent collection of works by the famous Danish painters, Anna Ancher, P.S. Krøyer, Holger Drachmann and others. In the 19th century, these world-renowned artists created works of art in the artists' colony, which primarily consisted of Scandinavian painters, known as “the Skagen Painters”.

After experiencing the "top" of Denmark, we return to the port of Skagen to re-embark our ship for a late lunch – and for the continuation into the North Sea onwards to Norway.

The seafarers known today as Vikings, consisted of people from the Nordic countries of Denmark, Sweden and Norway. Their expeditions aboard the famed longships took them all over the known world, where Viking settlements were established and thus impacted on the history of western Europe quite profoundly. As we brave some of the routes the Vikings sailed, we delve into their history and quite possibly debunk some romanticized views of these folk along the way.

Haugesund, Norway. A town of herring and Vikings

The home of the first Norwegian Viking king Harald Fairhair, Haugesund is located between Bergen and Stavanger in southwestern Norway. Here, nestled among small islands and mountains is where this wonderful old town by Kamsundet can be experienced. The strait itself, which protected the passing ship traffic, was also a source of massive herring fishing, which was the city's growth engine.

“Sildebyen” (literally translates into “Herringtown”) also offers a distinctive pink town hall from 1931. The history of shipping and shipbuilding is clearly seen and manifested itself as Norway's 4th largest shipping town back in 1913. The waterway also gave many of the inhabitants the opportunity to explore the world, and many captains and sailors have embarked from here on their first long voyages around the globe. Norway is still a great seafaring nation, with hundreds of thousands of Norwegians working on the oceans every day (Ocean industries count for about 70% of Norway’s export earnings).

Many Icelandic sagas tell us stories of the first Viking king, where the Orkneyinga and Heimskringla sagas specifically recount a military voyage to the Hebrides. Here the king fought to clear the islands of dissident pirate Vikings, who were raiding the Norwegian coasts. The expedition later continued to Scotland, much in the same way as our route takes us.

We are set to approach Lerwick near the "Main Land" of the Shetlands in the morning. The Shetland Islands consist of more than 100 islands, of which only 15 are inhabited year-round. The islands form the northernmost part of the United Kingdom, located approximately 300 km north of the mainland of Scotland. This "central" location in the North Atlantic has through the ages led many to the islands, and the Scandinavian heritage still shines through dialects, folklore and place names. Most famously the Shetland coat of arms still bears the old Norse words “Með lögum skal land byggja”, roughly translating into “using the law, we shall build the land”.

Once securely docked at the port, we depart through Lerwick towards Scalloway for a short scenic drive. From the elevated position we can enjoy the view of the charming village and the imposing Scalloway Castle. After a short photo stop, we continue eastwards through the area that is locally known as the “Black Gates” – an area where peat is still cut and used as fuel.

Following the road northwards our main destination of Clickimin Broch is only a short drive. There will be free time to discover this well preserved and restored Broch and learn more about life in the Iron Age.

(The coach excursion is part of the excursion package and is not included in the price of the trip).

Afterwards, we will return to Lerwick and the ship in the middle of the day. The rest of the day is for enjoying at leisure before departing in the early afternoon.

During the night we’ll have sailed out into the waters between the Northern Isles of Scotland and in the morning we’ll reach the town of Kirkwall on windy Orkney off the mainland of Scotland. Orkney is old Norse for the "Seal Islands", and, like the other North Atlantic islands, Orkney has a rich Viking heritage.

We depart Kirkwall and head into the west of Mainland, Orkney’s largest island. Along the way we will pass through rolling gentle landscapes into the Neolithic Heartland of Orkney, an area designated as a World Heritage Site due to its wealth of pre-historic archaeology. Passing the Standing Stones of Stenness, we will stop at the 5000 year old ceremonial circle: the Ring of Brodgar. From here we continue our journey back in time to one of the oldest European civilizations. Skara Brae, Northern Europe's Pompeii, which lay hidden for almost 5000 years before a massive storm (150 years ago) revealed the ancient settlement. The 10 small homes are almost ready for moving into, fully furnished and with sanitation - all made of stone.

Back in Kirkwall, we will visit one of the local distilleries for a tasting of some of the northernmost drops in Scotland. A fitting end to an excursion with such an amazing historical backdrop.

(The excursion is part of the excursion package and is not included in the price of the trip).

In the afternoon we departure south to Aberdeen.

The captain will lead the ship southwards along the east coast of Scotland, and we’ll arrive in Aberdeen, the Granite City, which is Scotland's third-largest city. At this point we’ll say farewell to the ship and its crew before departing for the airport to begin the journey home. 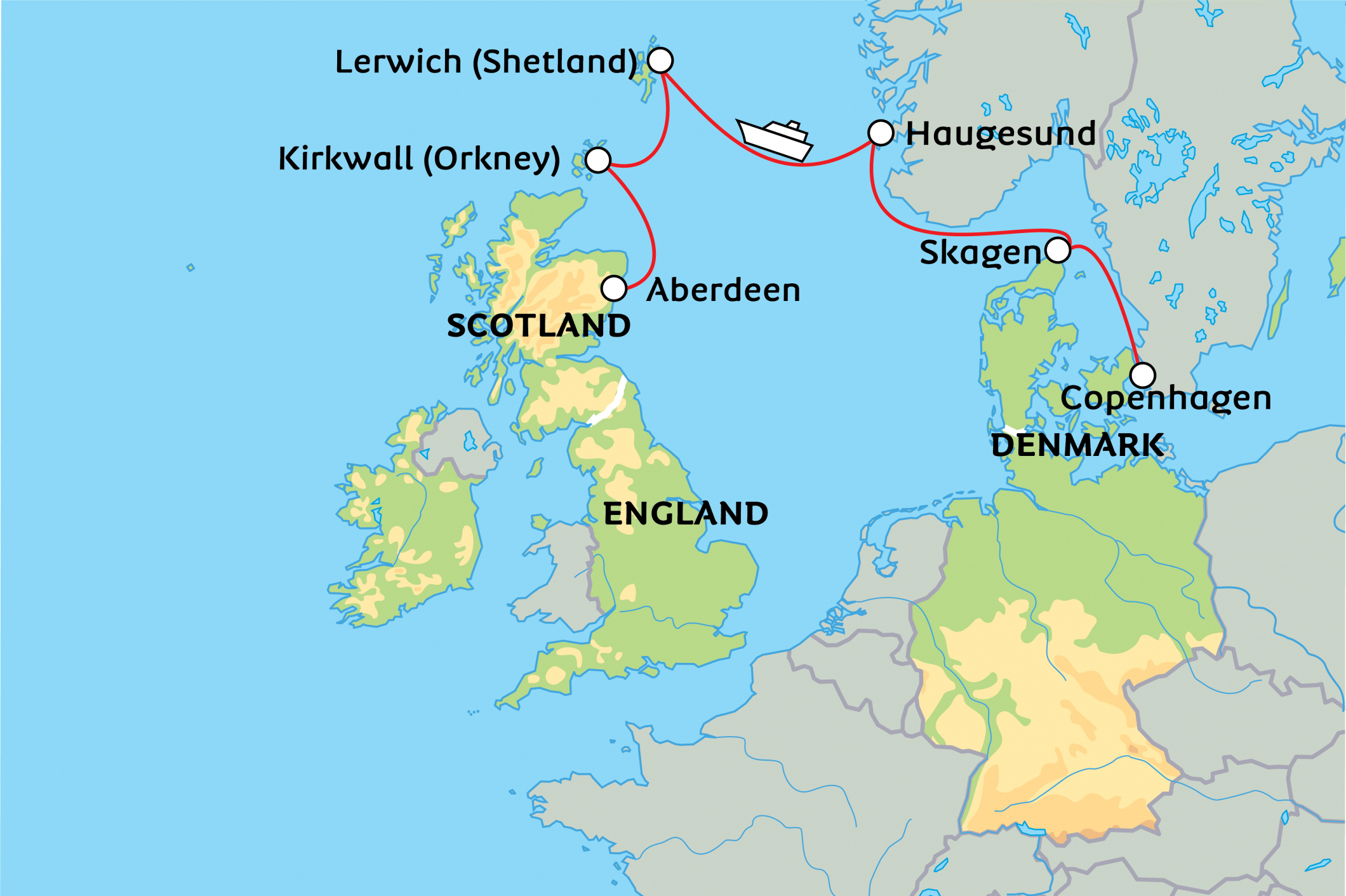 • 6-day/5-nights’ cruise on Ocean Albatros in a shared outside double room.

• Full board on the ship.

• Free coffee, tea, and afternoon snacks on the ship.

A feast for your senses!
Read more.

Info
Ship
May. 18, 2023
Ocean Albatros
Our cruises are primarily sold through travel agents.
If you are interested in this cruise, please don't hesitate to contact us and we will help you get in touch with a travel agent.