Volcanic Islands of the Sun

A voyage from Cape Verde to Lisbon

Macaronesia is the name for the Atlantic islands off the North African coast. It is also – according to mythology – the winterless resting place for the fortunate heroes of the Greek pantheon. On board Albatros’ brand-new expedition vessel Ocean Albatros we now have the fortune to visit five small sanctuaries in this long chain of volcanic islands. From two islands in Cape Verde Archipelago via La Gomera and Tenerife in the Canaries to Portuguese Madeira. After a unique 11-days’ voyage we reach Lisbon in Portugal and bid farewell to the crew and vessel.

Each of the islands we visit has its origin from a so-called hotspot of molten magma resting deep under the ocean floor. At intervals, the lava breaks through to form yet another island, while the older volcanoes slowly erode and disappear as submerged seamounts. On all our visits we will see evidence of this hot volcanic past from huge craters to steaming fumaroles and tell-tale lava formations showing signs from their molten creation. As we travel north across the Tropic of Cancer and into the trade winds, we go from desert-dry landscapes to cooler and more humid climates enabling local farmers to exploit the immense fertile value of volcanic soils. During the cruise we will experience the diverse cultures from the easy-going Caribbean ambiance in Cape Verde to hardworking mountain farmers on Madeira.

Ocean Albatros offers all the comfort needed for this long voyage. She is specifically designed to provide a better expedition experience than any other ship. The patented X-bow and zero speed stabilizers provide a calmer ride and reduces discomfort for passengers with a tendency to seasickness.

Praia is the bustling town on the south coast of Ilha de Santiago, and the capital of the Republic of Cabo Verde. The old colonial city center of Praia is built on a flat rock plateau and is a designated World Heritage site.

Albatros Expeditions’ new expedition vessel Ocean Albatros is anchored in the harbour, and you will embark the ship by Zodiac tender boats by mid-afternoon. After being shown to your cabin, you will be given the mandatory safety briefing, while the Captain gets ready to steer out into the Atlantic Ocean.

Our direction during the night is north from Praia which is located in the far south. The archipelago consists of ten islands and we steer between Santiago, the biggest of the Cape Verde islands, and Fogo, the tallest with a height of 2.830 meters. Fogo, which means ‘fire’ is the only active of the Cape Verde volcanoes with the latest eruption in 2014. It is also the youngest, having erupted from the sea floor a few hundred thousand years ago, compared to oldest islands dating back 180 mill. years.

In the morning we have arrived at the narrow strait between the islands Santo Antão and São Vicente, in the northern part of Cape Verde Archipelago. Ocean Albatros casts anchor in Mindelo Bay, sheltered from the northeast trade winds.

The town of Mindelo is an active, culturally hotspot, sweeping the circular seafront of Porto Grande Bay. Out of plenty cafés, restaurants and small concert halls float live music, not least on a weekend – when we are visiting the city! Enjoy the bustling markets, quiet parks, and plenty of small shops selling all sorts of local produce. A genuine ‘Caribbean’ ambiance!

The British East India Company used Mindelo as a coal deposit, and British colonial architecture is still seen around the otherwise Portuguese inspired city. Opposite the strait lies the mountainous island of Santo Antão, and on the other side of the Grande Bay is Monte Cara with its characteristic profile of a reclining human face.

Late in the afternoon we ‘set sail’ for the long leg north to the next group in Macaronesia, the Canary Islands.

At Sea towards Canary Island

Far into the atlantic, following a north-northeastern course, we cruise along the coast of sahel countries of mauretania and western sahara. we are up against the perpetually dry and strong northeast trade wind. but ocean albatros’ unique x-bow and modern stabilizers keep the vessel steady, enabling us to enjoy exquisite dining, interesting lectures or watching for dolphins, whales and seabirds from panorama lounges indoor or from the outside observation decks.

We arrive in the morning at the east coast of the island La Gomera to go alongside in the small port of San Sebastián. Being the largest town on this small island it has some 9.000 inhabitants. We take a stroll into the quiet streets and stairs of this steep-sided and valley-locked town, where Christopher Columbus spend a month before his Atlantic crossing, 530 years ago.

The Canary Islands are - as most oceanic islands - of volcanic origin. With its circular form and central highlands, La Gomera looks the shape of a volcano. But the island’s volcanic past is worn-down, and the recent form is the result of secondary erosion, leaving a radiating network of steep-sided barranco valleys. A a few dramatic rock towers like “Los Roques” are primary remnants of original volcanic plugs.

La Gomera is located in the trade wind belt, and with a year-round humid wind coming in from northeast, the island’s northern slopes are covered in thick junglelike forest. This is the famous laurel forest, eternally green and the life blood of the island. The leeward southern slopes on the other hand are brown and almost barren.

The local cuisine has retained much of its original flavors and recipes, which some of the more visited Canary islands might have lost. So, it is important to take a break during the visit to enjoy a glass of local wine and a tapa with almogrote, a local garlic cheese spread.

It is possible to join an optional half day bus excursion from San Sebastian to Garajonay National Park with a hike into the massive fern and laurel forest. The trip is part of the excursion package and are not included in the price for the voyage.

Today we arrive at the largest of the Canary Islands, Tenerife. Tenerife entices with beautiful nature and beaches, delicious food - and not least a mild and pleasant climate.

We dock in Puerto de la Cruz on the northwest coast. The city is surrounded by cliffs and is a popular port of call for cruise ships. In the city you can see the beautiful park García Sanabria and the beautiful baroque church Iglesia de la Concepción near the port, which forms the city center. Close to town are the beaches of Las Gaviotas and Las Teresitas.

The island's most famous natural attraction is the Las Cañadas del Teide National Park in the middle of the island, where the 3,718-meter-high volcano Teide - Spain's highest mountain - dominates the landscape. The national park is on UNESCO's list of world natural heritage. Join the optional excursion which has a bus pickup from our pier. The trip is part of the excursion package and are not included in the price for the voyage.

Should time allow, the day could be spiced up with a little local gastronomy, like delicacies from the sea, tapas and the popular classic, paella. Or a local dish, papas arrugadas, "wrinkled potatoes".

Departing Tenerife in the evening, our captain sets out for a relaxing day at sea.

At sea towards Madeira

Sea days are good for catching up on local knowledge during lectures by the expedition team, reading books from the library or enjoying the sun and sea view from upper deck.

Early morning, we dock at the pier in Funchal, beautifully situated in a bay surrounded by mountains. The Portuguese origin does not deny itself, as the building style has the city affectionately referred to as "Little Lisbon".

We will take a leisurely walk through the narrow-cobbled streets, where small squares entice with cozy eateries. Jardin Municipal is one of the city's many beautiful gardens and close by is the magnificent cathedral. The church was built in the 16th century in classical Portuguese-Manueline style. The square Largo do Colégio and the town hall are interesting before visiting the famous Mercado dos Lavradores (Farmers' Market), located in a large art deco building. Madeira is known for its flowers, orchids, the characteristic orange-yellow perennial Strelitzia. At the market you really sense how lush the island is and how many amazing plants and crops the volcanic soil produces.

The volcanic origin of Madeira reaches back to the dinosaur era of Cretaceous, where thick layers of sediments were deposited in the young Atlantic Ocean. Thus, layers of lava and intruded volcanic rock can be seen alternating with layers of coral reefs and marine limestone up to 400 meter above sea level.

On this day at Madeira, we offer an optional half day excursion into the interior of this lush and mountainous island. Valley of the Nuns (Curral da Freiras) might be one of the coolest places you can visit. Not only is it a village built on the crater of an extinct volcano, but it was once a place where nuns would hide when pirates attacked the city of Funchal. The trip is part of the excursion package and are not included in the price for the voyage.

In the evening we bid farewell to this last island on our Macaronesian tour. Around midnight we will pass at distance the tiny island of Porto Santo which has a population of 5,000 Portuguese inhabitants.

At Sea towards Lisbon

Enjoy Ocean Albatros relaxed luxury ambiance for the next two days at sea. As we are moving from trade wind to the spring’s westerly winds, the sea might - or might not – turn rougher. But then again, with the X-Bow and automatic stabilizers, rolling and slamming is cut to an absolute minimum.

Early morning on this last day of our adventure, we head into the mouth of River Tagus to Lisbon, the westernmost capital on the European continent.

Lisbon has grown around a valley, and its many hills allow for beautiful views everywhere. The city is one of Europe's oldest and old is mixed with new in a perfect combination.

Ocean Albatros docks in the huge Tagus estuary, and after breakfast, it is time to bid farewell to vessel, crew and expedition staff and get ready for the homebound journey. 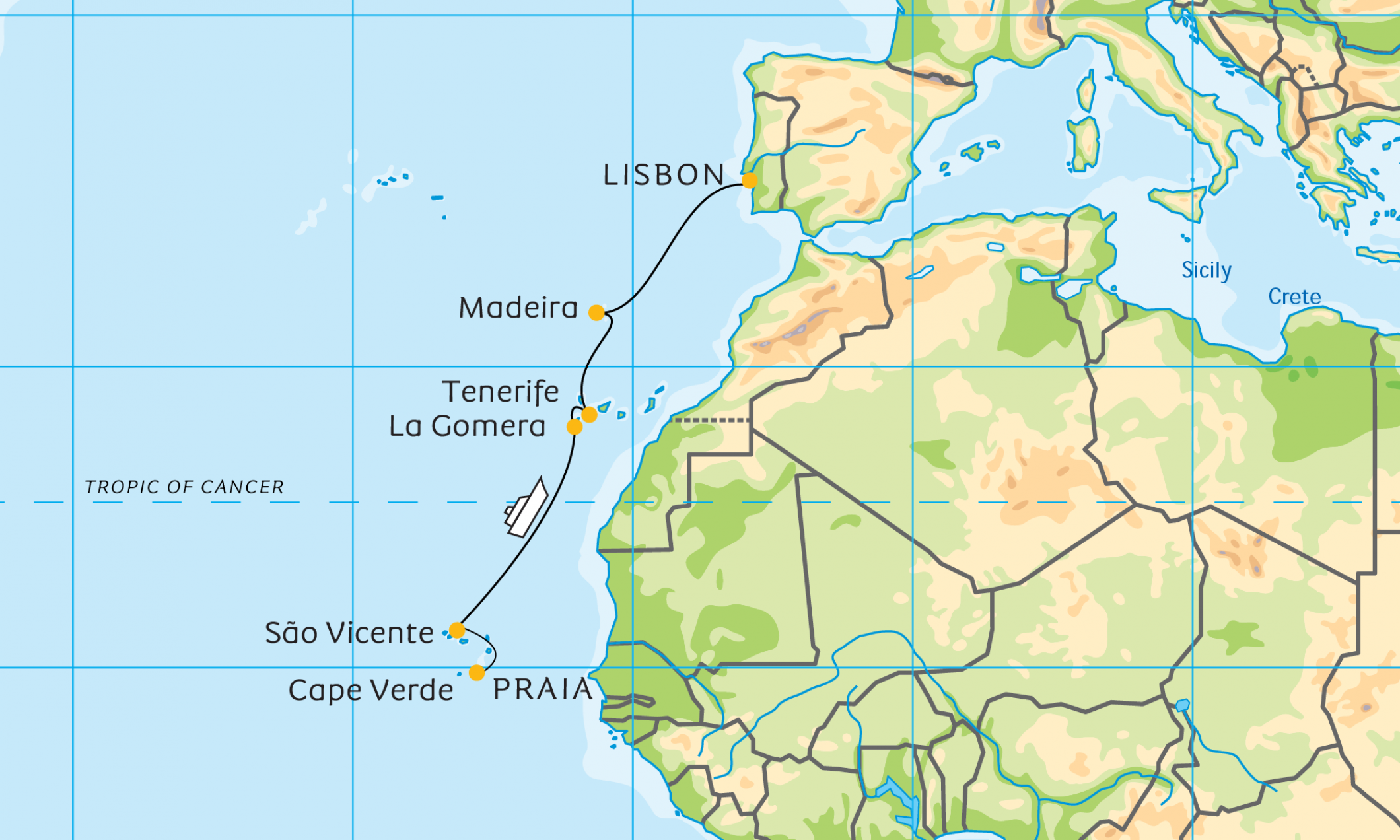