Nordic Rulers of The Baltic Sea

Expedition voyage from Finland to Copenhagen on board Ocean Albatros.

Ruling the Baltic Sea has been the goal of Nordic kings, German knights, and powerful merchants since the Middle Ages. One Danish King fulfilled his dream of power for a few years in the 14th century, whereas the Swedish Empire lasted for more than a hundred years until it broke up at the peace negotiations in 1721. And throughout these eras the Hanseatic League drew strong economic threads between the important trading cities of the Baltic Sea.

On this historical cruise onboard our new expedition vessel Ocean Albatros, we visit several islands that for shorter or longer periods were - or still are - Swedish. We take advantage of the ship's rubber rafts to get ashore in small ports, and we visit exciting and unheard-of islands that larger cruise ships cannot call in at. Ocean Albatros offers all the comfort and flexibility needed. The vessel’s unique and compact construction ensures unmatched stability in rough sea, as well as the lowest carbon emission of any expedition cruise vessel.

We cruise from Turku in the Swedish-speaking part of Finland and take a course through the archipelago into the Gulf of Bothnia. We anchor off and visit the small Estonian island of Ruhnu Saar, where Swedish farmers and seal hunters lived for more than 600 years. From here we cross the Baltic Sea to Gotland and beautiful Visby, one of the most important trading towns in the mighty Hanseatic League. In Kalmar on the Swedish mainland, we stroll through ancient streets to the magnificent Kalmar Castle before we continue to tiny Christiansø and to Hammershus on the island of Bornholm.

The voyage ends in central Copenhagen, where we disembark just besides the famous Little Mermaid.

Our visits ashore are organized with a focus on hikes and city walks. Every day we walk from the landing pier and into interesting and historic town centres or landscapes along the way. The hikes will have a length of three to six kilometres. Albatros' tour guides accompany the guests in small groups, or even explore the areas on your own.

Islands in the Turku Archipelago, Finland

Town of Visby on Gotland, Sweden

Arriving by Zodiac to tiny island of Christiansø, Denmark

Christiansø, most easterly part of Denmark

Disembarkation is in central Copenhagen, close to The Little Mermaid

Ocean Albatros, our new expedition vessel. 93 elegant double rooms, most of them with balcony

Ocean Albatros is docked alongside the port of Turku in the southwestern part of Finland, where our embarkation starts.

Turku is Finland's oldest city and has been the country's administrative centre for several periods. Whilst under Swedish rule, the city was called Åbo and even today many of the inhabitants have Swedish as their first language.

You will be shown to your cabin, and the crew will carry out the mandatory security procedures and drills. While our first dinner is served in the elegant restaurant, the captain sails the ship past thousands of skerries, small and large islands in the hundred-kilometre-wide archipelago that surrounds Turku.

During the night, our ship sails along the coast of Estonia and we pass close by the island of Saarema - or Ødsel as it was called in the Middle Ages - before we arrive at the small Estonian island of Ruhnu Saar. We anchor near the island, and with the ship's solid zodiac rubber rafts, all guests are tendered into the small harbour on the island's south coast.

Ruhnu Saar means ‘Seal Island’ in Lithuanian, and archaeologists has revealed that seal hunting was a major source of nutrition on the small island since ancient times. Swedish settlers settled on the island in the middle of the 14th century and called it Runö. By the middle of the 19th century, the island had 400 inhabitants who maintained Swedish traditions, language, and costumes for 600 years. At the end of World War II, Russian troops occupied Ruhnu, and everyone of Swedish descent moved from the island to settle in Sweden. Ruhnu now has 60 Estonian inhabitants.

We walk from the harbour to the village on the middle of the island, a stretch of three kilometres. The island has a minibus which runs the stretch several times in each direction during our stay. As our cruise guest, you can ride it for free if the road feels too long.

In the village we will hear about the island's fascinating history and see the solid log cabins and farms left behind by the former Swedish residents. We also visit the small St. Magdalena Church, built in 1644 and thus the oldest preserved wooden building in Estonia. Ruhnu also has its own Eiffel Tower, a 30-meter-high lighthouse, which was commissioned from Eiffel himself and built in 1877.

When the last guest and Zodiac are back onboard the Ocean Albatros, the captain navigates the ship out of the Gulf of Riga in the afternoon, heading for the Baltic Sea and the island of Gotland.

UNESCO WORLD HERITAGE IN THE HANSEATIC TOWN OF VISBY, GOTLAND

Today we dock on Gotland, in the medieval town of Visby, which is on the UNESCO World Heritage List.

Where it was the North European crusaders who dominated the Baltic Sea areas in the 12th and 13th centuries, it was trade between strong cities that gained the greatest influence in the years that followed. Large quantities of herring from the Sound, Eastern European skins, amber, wax and timber, Swedish copper and iron, weapons and metal goods from Southern Europe crossed back and forth across the Baltic Sea. All run by the German merchants in the Hanseatic cities in general and Lübeck in particular. Visby flourished during these years and had stone houses and church buildings that made the other churches in the Baltic Sea region fade. But it soon came to an end. Danish King Valdemar attacked Visby in 1361 and ravaged it. Visby lost most of its trade in the following years, and the city slowly languished.

It does not change the fact that Visby today is fascinatingly beautiful with narrow streets, old houses and the solid ring wall that goes around the whole city. On our city walk we will also see the impressive vaults in the church ruin St. Nicholas, who in 1525 was burned down during a conflict.

Kalmar is one of Sweden's oldest cities, beautifully situated next to Kalmar Sund and Öland. Our ship docks close to the centre, with an easy walk into the right-angled streets of old Kalmar, protected behind the old ring wall. All our guests are offered a guided city walk that ends at Kalmar Castle. The four or five kilometre walk, will be covered at a leisurely pace.

Kalmar, which is an administrative city for south-eastern part of Sweden, is known for its historic buildings, beautiful parks, and many sights from the heyday in the 17th century. The city has twice received the "Europa Nostra award" for its well-preserved urban environment.

Kalmar Castle, located a little south of the centre, was built in 1160 and quickly fortified into a strategically important castle that served as protection against pirates in the Baltic Sea. In 1397, it formed the framework for one of the most important events in Nordic history: the formation of the Nordic Kalmar Union (1397-1523). It was a political union consisting of the Danish-Norwegian kingdom and Sweden under the leadership of the Danish Queen Margrethe I (1353-1412).

We sail from Kalmar in the evening and set course for some tiny remnants of the Danish empire: Ertholmene.

ISLANDS OF CHRISTIANSØ AND BORNHOLM, DENMARK

Few places in Denmark are as idyllic and beautiful as the two rocky islands Christiansø and Frederiksø. It is almost as if no house is placed incorrectly, not a blade of grass is superfluous. Eiders breed everywhere on the rocks, and in the surrounding sea the seals frolic. The islands are small – just about 500 meters across - and the harbour is even smaller with no room for our vessel. But Ocean Albatros is constructed for just this: With zero speed dynamic positioning, easy access to a fleet of sturdy Zodiacs, and the help of Albatros Expeditions’ skilled tour guides and expedition team, all guests will land safely in no time.

In 1684 The Danish king Christian V fortified the islands with Great Tower on Christiansø and Small Tower on Frederiksø. More than 800 soldiers were positioned, but when the fortification lost its importance, the number dropped drastically. However, the Ministry of Defence allowed former soldiers to live on the islands as fishermen, and they became the basis of the small civilian population, of which around 90 still live today.

We have a few hours to "explore" the islands. A circumnavigating hike around both islands is just about two kilometres. The two islands are connected by a small bridge.

By noon we sail from Christiansø towards the Danish island of Bornholm. While enjoying lunch on board, we pass along the north coast of Bornholm and around the granite dome of Hammerknuden. The anchor is lowered off Hammerhavnen on the island’s west coast, and again the rubber rafts are used to get everyone ashore, just below Hammershus Castle, located high above the steep rocky coast.

Hammershus was probably built and inhabited by a powerful bishop, Jens Grand in the late 13th century. Jens Grand, like so many other clergy of the time, had disagreements with contemporary kings, and was finally accused and imprisoned for complicity in the murder of King Erik. He fled from his prison to Bornholm, where he in all probability founded one of the strongest Baltic castles of the Middle Ages.

The trip from Hammerhavnen and up to Hammershus is arranged as a hike. After the visit to the castle ruins, you can return to the harbour and the ship or extend the walk to Hammerbruddet and the circular Opal Lake, which is beautifully situated between the granite quarry's steep rock walls. The quarry was initially thought of as an horrible anomaly in the landscape 50 years ago is now transformed into a beautiful and fascinating landscape surrounded by tall bird cliffs.

The hike is slightly hilly and from three to six kilometres long - depending on the route chosen.

Early in the evening, the anchor is hauled in, and while we enjoy the farewell dinner, we set course for the sunset and Copenhagen.

COPENHAGEN. LANDING AND FAREWELL WITH OCEAN ALBATROS AT NORDRE TOLDBOD

We arrive in the Port of Copenhagen early in the morning, where we dock right in the centre of the city, close to Copenhagen’s Little Mermaid. After breakfast, it's time to say goodbye to the ship's crew and Albatros' tour guides. Either continue your adventures from Copenhagen or begin your return travel home. 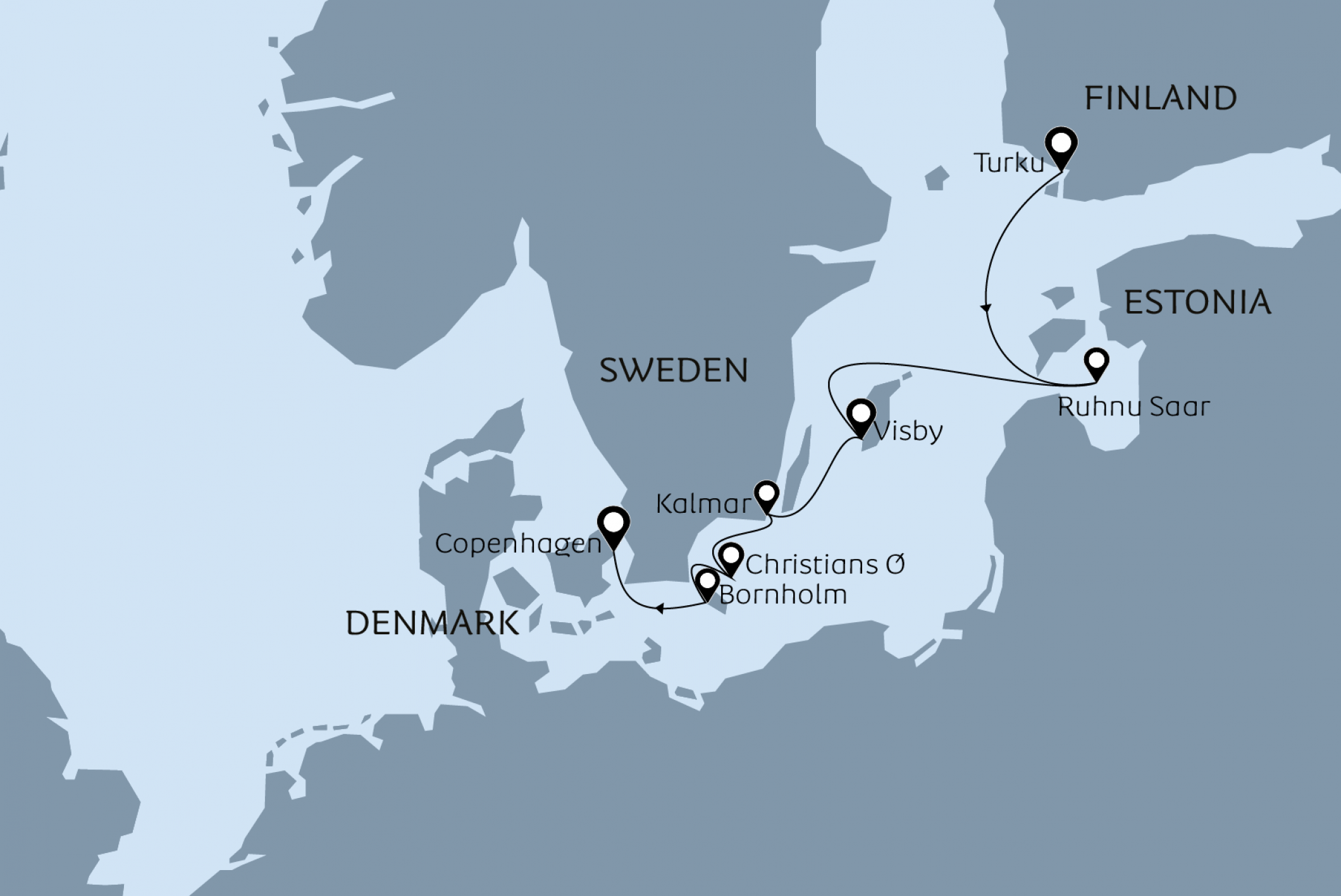 Info
Ship
May. 13, 2023
Ocean Albatros
Our cruises are primarily sold through travel agents.
If you are interested in this cruise, please don't hesitate to contact us and we will help you get in touch with a travel agent.