Crusaders of the Baltic Sea

After the fall of Jerusalem in 1187, Christian states and their crusading knights pointed their weapons at the pagan tribes along the Baltic Sea. This rarely told story of the Danish medieval kings and the expansion of the German order of knights forms the framework for this cruise.

Historical cruise from Copenhagen to Turku in Finland - with a visit to ancient kingdoms of the Baltic.

The Baltic Sea has always played a central role in the history of Northern Europe. It acted as a parallel to the Mediterranean for the surrounding states, and for a short number of years Denmark – due to her maritime sovereignty – expanded into an empire that stretched around the Baltic Sea all the way to Estonia. But the Danish king soon lost all in fierce competition with Teutonic knights, Swedish rulers, and powerful members of the Hanseatic League's extensive community. On our route east, we visit a couple of the medieval trade association's strongest members, Gdansk and Klaipéda, then called Danzig and Memel. We reach the island of Øsel, now Saarema, Denmark's easternmost possession. Our voyage ends in Finland in the beautiful town of Turku, after which we fly back to Copenhagen from Helsinki.

Our brand-new expedition vessel Ocean Albatros will be our home for this unique cruise. Like her sister ship Ocean Victory, she is a revolutionary and stylish small ship that combines exquisite comfort with modern technology as well as unique stability in rough seas to a degree only seen on the largest cruise ships. Ocean Albatros can accommodate 188 passengers, and the elaborate design, together with a fantastic service from the staff, provides an intimate atmosphere on board. It is easy to find your way around both the common areas inside and the view areas at the top of the ship, and you avoid large crowds and queues. The total of 93 comfortable and spacious guest rooms all have unobstructed views of the sea and the coasts we pass. Most rooms have a private balcony.

The cruise takes place in the late spring, when the weather, not least in the eastern part of the Baltic, is often stable and warm.

Our voyage starts from Central Copenhagen - near to The Little Mermaid

On Jarlsmund peninsular on Rügen. Stronghold of Wend pirates

Town of Stralsund in Germany - a former Hanseactic trade port

Gdansk has been a trading port since the middleages

Klaipéda is known for its amber. It was and is an important trading object

Tallinn Port and the river Pirita

Island upon island in the Turku Archipelago

The cruise begins in the heart of Copenhagen, where Ocean Albatros is moored.

After embarkation and mandatory safety procedures the lines are thrown and the captain sets a southern course through Øresund, the strait between Sweden and Denmark. We can then enjoy our first dinner in the ship’s exquisite restaurant.

Rügen is Germany's largest island. High white limestone cliffs, a winding coastline with fjords, headlands, and excellent sandy beaches as well as beautiful historic towns make the island one of the country's most distinguished travel destinations.

In the Middle Ages, Rügen was inhabited by the Wends, a West Slavic, pagan people. Everyone robbed everyone at the time, but in Danish history, the Wends stand as some particularly unchristian pirates who made repeated looting expeditions against Denmark. In 1168, the Wends were defeated on Rügen during a so-called crusade led by King Valdemar I and Bishop Absalon. As a final punishment, a sculpture of the four-headed god Svantevit, was chopped down as fuel for the Danish soldiers' cooking fire.

Ocean Albatros docks in Rügen’s Sassnitz. From here it is possible to participate in the day's excursion by bus. The trip goes past the Jalsmund with its white chalk cliff to Cape Arkona on the northernmost tip of Rügen. Here we can get an impression of the Wends’ fortifications. We visit to the old Hanseatic town of Stralsund, one of the most important historic cities in Northeast Germany, before returning to Sassnitz and our ship.

GDANSK, A CRUSADERS’ STRONGHOLD IN POLAND

We dock in the Gdynia, the port city of Gdansk.

Today it is possible to take part in an excursion by bus to the nearby over 1000-year-old city of Gdansk, Poland’s maritime capital.

The beautiful city centre and the shopping street between the Golden Gate and the Green Gate is worth seeing. The courthouse and the Neptune Fountain also help to make the city something very special.

Gdansk is probably best known for its tumultuous history and the city was largely razed to the ground during World War II. Today, however, it is not marked by this and has been rebuilt, so that the old traditions of architecture have come into their own.

From Gdansk we drive to nearby Malbork or Marienburg, where we will take a trip back to the Middle Ages of the Baltic Sea. We visit the huge castle complex of the German Knights. The so-called Teutonic Crusaders were originally a hospital order that was transformed into a military order in the 13th century. The order became more and more active in the Baltics as the influence in Palestine faded, and with the blessing of Pope Honorius, they embarked on a centuries-long crusade against the Baltic tribes accused of murdering Christian priests and missionaries. The order received the blessing of both the dukes and the pope to retain and control conquered lands and eventually came to rule the entire area between the German Empire to Latvia and the border with present-day Finland.

We drive back to the port of Gdynia and our ship, and we continue our voyage to the northeast through the Baltic Sea.

Klaipeda or Memel, as the Germans called the city in the period from 1252 to 1918, when they ruled the area. When the first crusaders came, there was only an empty coastline, and they quickly defeated the local pagan Baltic tribes. To fortify the natural harbour area at mouth of the Curonian Inland Lake, the castle Memelburg was built. German artisans and traders gradually settled, not least because of the membership of the Hanseatic League.

In 1923, the city was annexed by Lithuania and changed its name to Klaipéda. Today, the city is clearly marked by the wealth of earlier times, even though large parts of the city were destroyed during World War II. The centre is beautifully rebuilt, and you feel the ancient ambiance as you stroll through the cobbled streets.

A guided city walk is arranged, after which you can explore through the narrow streets on your own – maybe followed by a snack in one of the many cosy cafes.

We depart Klaipéda in the late afternoon.

The conquest of Jerusalem in 1099 resonated all the way to Denmark. When the Pope legitimized Christian rulers to convert pagans, the Danish medieval kings were not late in exploiting Denmark's superiority as a maritime nation. Within a few years, Denmark conquered large areas around the Baltic Sea. In 1206, King Valdemar the Conqueror directed a successful attack on the island of Øsel near Estonia, and later - in 1219 - Tallinn was conquered.

We arrive at Øsel, which is now called Saaremaa, from the south to dock at the main town of Kuressaare. The port is located approximately 5 km from the small towncentre, and after lunch on board, transport to the city is arranged.

We will visit the beautiful bishop's castle, which is the best-preserved medieval fortress in Estonia. The Danes built a fortification on the same site, but when Øsel proved impossible to hold, it was burned off again. The castle in Kuressaare was built in the 14th century by the town's bishop, but was subsequently used by Danish, Swedish, German, and Russian occupying forces, who all left the building unchanged.

The island of Saaremaa has had a harsh history, which made it one of the poorest areas of the Baltic Sea. The last occupation during the Soviet era completely isolated the island which is a reason why Kuressaare has retained its beautiful provincial character with Gothic and Baroque architecture. The city has been spared industrial expansion and has just 16,000 inhabitants.

We go on a city walk before taking the bus back to the harbour and Ocean Albatros.

During the night we have cruised from the Gulf of Riga into the Baltic Sea, and during the morning we entered the Gulf of Finland. We arrive in Estonia's largest city Tallinn after lunch.

The written history of the city begins with the Danish conquest of this strategic area, a natural harbour at Gulf of Finland, and “Tallinn” supposedly translate as "The Danish City", named after the castle, built in 1219 on top of a hill. The castle ring wall subsequently defined the original outline of old Tallinn. The legend tells us that Dannebrog, the flag of Denmark, fell from the sky here in central Tallinn during a fierce battle in 1208 – which miraculously led to a Danish victory. A visit to the memorial is of course a must.

Tallinn is one of Europe's best-preserved medieval cities. With its winding, cobbled streets, the city has retained its appearance since the 14th century. Tallinn's golden age was between the early 15th century until the middle of the 16th, when the city was a power factor in the Baltic Sea region, not least by virtue of its membership of the Hanseatic League. The economic progress led to a need for a strong defence, and enabled large investments in architecture and art.

Today, we offer a guided city tour around Tallinn. By bus we take the short trip into the old town. Places to be seen are the high-lying quarters at the Kiek in de Kok cannon tower, the narrow, winding streets to the lower part of town with the Danish King’s Garden, the castle, which now houses the parliament, and the Alexander Nevsky Cathedral. The magnificent 15th-century building is one of the best-preserved Gothic town halls in Europe.

In the late afternoon we return by bus to the harbour and Ocean Albatros.

TURKU, OLDEST CITY IN FINLAND. DISEMBARKATION AND TRANSFER TO AIRPORT

During the early spring morning, the ship has passed thousands of small and large islands in the hundred-kilometre-wide archipelago that surrounds the town of Turku in southwestern Finland.

Turku is Finland's oldest city and has been the country's administrative centre for several periods. Under Swedish rule, the city was called Åbo and a large part of the inhabitants still have Swedish as their first language.

After breakfast, it is time to say goodbye to the ship's crew. A bus transfer has been arranged from Turku Port to Helsinki Airport, approximately 170 km. 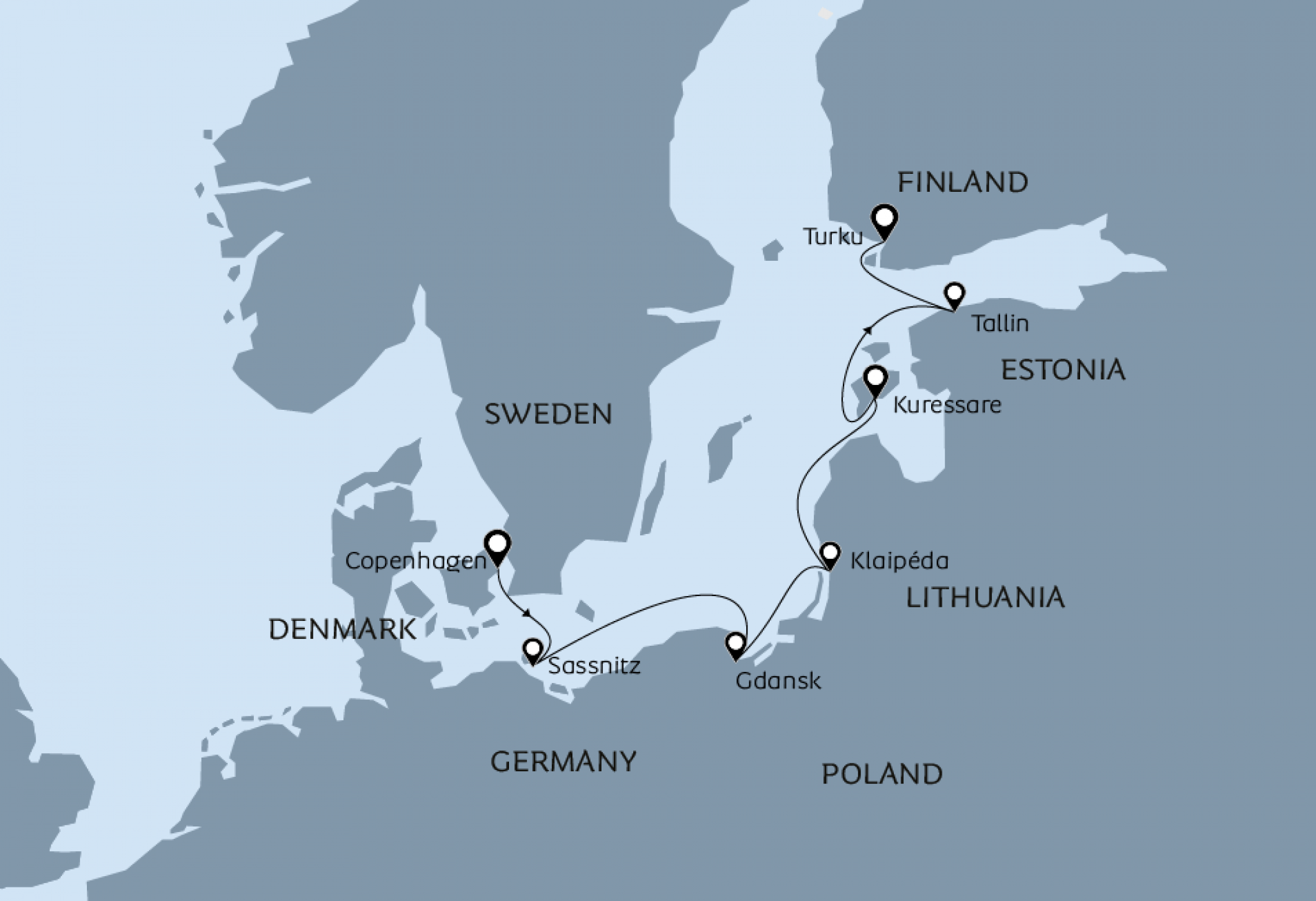 Info
Ship
May. 7, 2023
Ocean Albatros
Our cruises are primarily sold through travel agents.
If you are interested in this cruise, please don't hesitate to contact us and we will help you get in touch with a travel agent.