Towards the high Arctic – from Iceland to Svalbard

After the classic Golden Circle Tour through Iceland’s volcanic wonderland, embark on Albatros’ own expedition vessel Ocean Atlantic on a spectacular voyage into the high Arctic.

After the classic Golden Circle Tour through Iceland’s volcanic wonderland, embark on Albatros’ own expedition vessel Ocean Atlantic on a spectacular voyage into the high Arctic. We will make calls on the enigmatic island of Jan Mayen and the glaciated islands of Svalbard. This is early summer, the air is filled with migrating birds – and sun never sets. When approaching Svalbard, we will all scout for sea mammals and seal-hunting polar bears on the pack ice.

This voyage is the perfect combination of adventure and natural science as well as a view into millennium-old history of Icelanders and their Viking ancestry. You can look forward to magnificent scenery on the northernmost islands of the planet.

Welcome to Iceland!
Keflavik Airport is located on the Reykjanes Peninsula and numerous buses will take you to Reykjavik close to our hotel. You might want to start your journey by visiting the most famous spot here, the Blue Lagoon. There are buses going via The Blue Lagoon to Reykjavik. The peninsula is an active geothermal area with many hot springs and recent lava fields revealing a relatively barren landscape. Near the geothermal power plant Svartsengi, we reach the wellknown Blue Lagoon or the “Bláa Lónid”. Here you can take a healthy swim in the 37-39 degree in the warm and very light blue water. The extraordinary color of the water is due to silicon mud and a special blue-green algae, which even has a healing effect on psoriasis. Stylish changing and bathing facilities are part of the visit. Remember to bring swim suit; towel and bathrobe can be rented on site. After the relaxing bath, you continue towards the capitol of Iceland, Reykjavik. Upon arrival and  check in to our hotel and the rest of the day spent on strolling the streets of this small and charming city. You will meet you guide for the next 2 days in the lobby of the hotel before going for dinner in a local restaurant.

After breakfast we meet our local Icelandic guide and a bus to begin possibly the most classic excursion on Iceland: The Golden Circle.

You can look forward to magnificent scenery and an exciting insight into the dramatic millennium-old history of Icelanders. We begin at Skálholt, where the island’s bishop’s diocese was established in 1056. Unfortunately, an 18th-century earthquake destroyed most of the original diocese. From the present church, built in the 1960s, there is a great view of the surrounding countryside, and in clear weather, Iceland’s most famous volcano, Hekla, is visible in the horizon. About 40 kilometers from Skálholt we’ll find the Gullfoss waterfall, possibly the most impressive sight in Iceland.  Dropping 32 meters in terraces through a deep gorge, Gullfoss was  rst known

by the outside world at the beginning of this century. A short drive from Gullfoss is Geysir, the hot spring giving name to all other geysers. Geysir began erupting in the late 13th century, becoming dormant afterwards for many years. It became active again a er a volcanic eruption in 2000, but today it is considered to be asleep.

meters into the air, an impressive sight! On our way to UNESCO-protected Thingvellir National Park, we stop at Laugarvatn, a popular excursion destination for Reykjavík residents who come here during weekends to relax at the hot springs. Thingvellir is a fascinating geological place as well as being the frame of the oldest parliament in the world, dating back to the year 930.

The Icelandic Alting, where all major historical decisions were taken, gathered here until 1798.

Together with Iceland’s largest lake, Thingvallavatn, the area was laid out as a national park 1930. The many gorges and cracks that run through the Thingvellir plain mark where the Mid-Atlantic Spreading Zone “goes ashore” and two of the Earth’s major tectonical plates, the European and American plates, move apart. At every little earthquake in Iceland, Thingvellirsletten and Iceland become a little bit wider!

A lunch will be served during the excursion. Upon returning to Reykjavík the rest of the evening is free in Reykjavík. The ci­ty has a large and rich selection of restaurants for all tastes and wallets and is definitely worth a night out.

Day at leisure and embarking the Ocean Atlantic

Before embarking our expedition ship, the Ocean Atlantic there’s now time to explore Reykjavik on your own. Take a stroll through the main street of Laugavegur, visit the full sized whaling exhibition, Whales of Iceland or visit the Hallgrímskirkja church. Al this can be done before our journey through the North Atlantic to the high Arctic begins.

Mid afternoon we are transferred to the ship and we board Ocean Atlantic and set our course northbound through the Denmark Strait for our first destination, the remote Arctic island of Jan Mayen.

At sea towards Jan Mayen

During our voyage our lecturers onboard will make inspiring and enriching presentations about both Iceland’s past history and about nature, wildlife and climatology.

We make a shore landing by Zodiacs on Jan Mayen, at the foot of the 2200 meter Beerenberg volcano

Listen to a lecture from our experienced expedition staff, see a film about Arctic nature – or go out on deck to catch glimpses of migrating birds and hopefully some whales in their natural habitat.

Approximately in the middle of the North Atlantic lies the enigmatic volcanic island of Jan Mayen. And if not exactly in the middle, at least it is located precisely on the Mid Atlantic Ridge, the reason for its volcanic existence. And enigmatic it is, not only because of its isolation but also due to the almost perpetual clouds and fog that hovers above it. Jan Mayen belongs to Norway, and the mountain Beerenberg is one of the higher of Norway’s 300 summits above 2,000 meters.

The island is inhabited by only 18 persons, running the meteorological station and the Norwegian Defence. We will try to go ashore at the narrowest part of the island, from either south or north, depending on the prevailing wind and surf. The volcanic origin is visible all over with cinder cones, lava flows and the Mount Fuji-like appearance of Beerenberg looming above. After a pleasant stroll on the narrow isthmus we board the Zodiacs and Ocean Atlantic to continue our voyage north.

At the sea towards Svalbard.

Lectures, movies or maybe a game are some of the activities and this sea day.

We are getting closer towards the islands of Svalbard, and it should be possible to spot the largest island, Spitsbergen, during the afternoon.

Our route for this day is much depending on conditions. Not least the pack ice coming from theArctic Sea as well as from calving glaciers, and also solid winter sea ice.

Our vessel has an ice class of 1B and the Captain should be able to safely approach the edge of the ice to give us the opportunity to spot our first polar bear, hunting for seals. During the night the ship will sail towards the main town of Svalbard, Longyearbyen.

Early in the morning the ship arrives in Longyearbyen. After breakfast and farewell greetings to the expedition team and crew, disembarkation will take place. 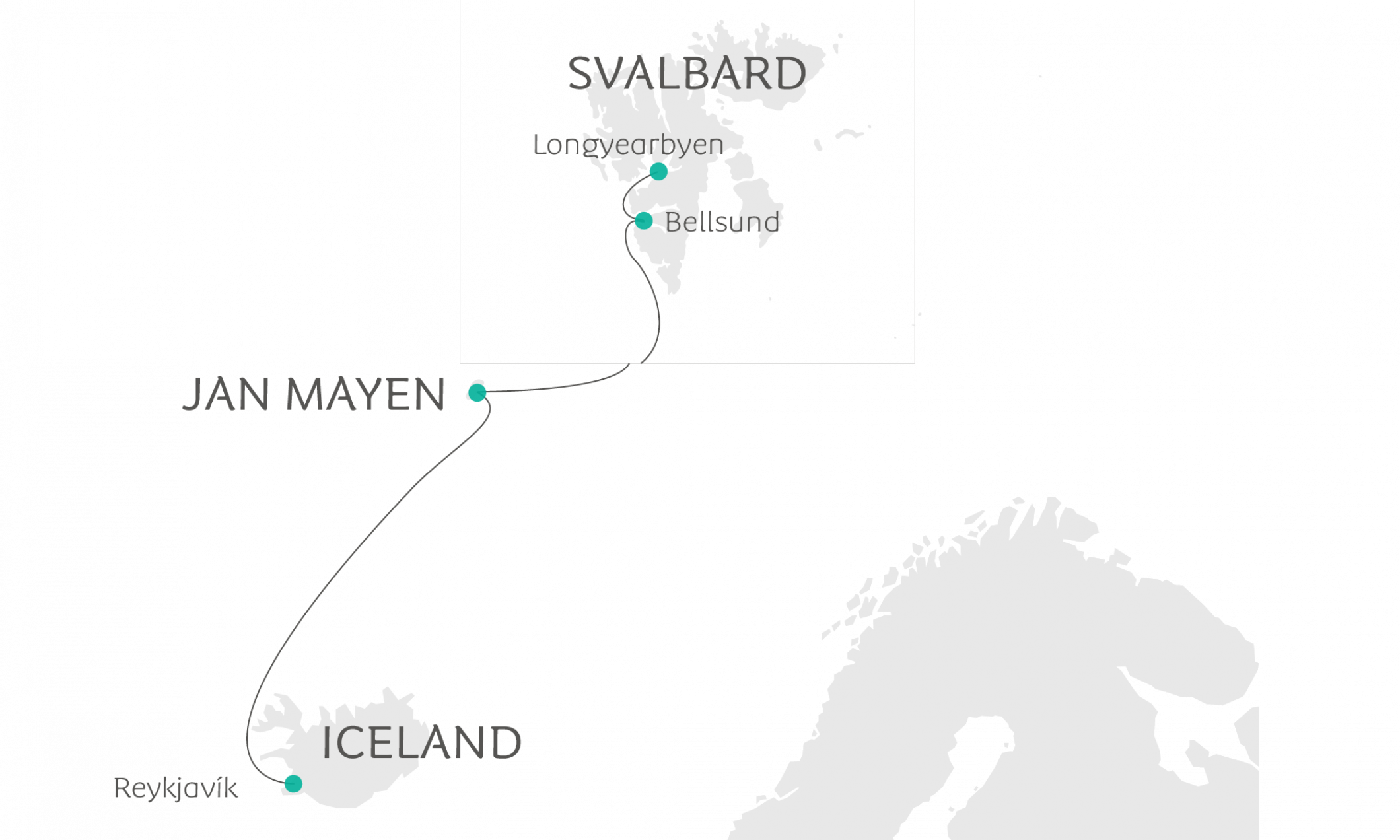 International flights to Reykjavik Iceland /from Longyearbyen, Svalbard (*).
Travel insurance.
Cancellation insurance.
Extra excursions and activities not mentioned in the itinerary.
Single room supplement.
Meals not on board the ship.
Beverages (other than coffee and tea).
Tips for the crew (USD 14 per passenger per day).
Personal expenses.
Anything not mentioned under 'Price includes'.

(*) Flight from Longyearbyen to Oslo available on request

The Ice Sheet Is one of Greenland’s biggest attractions. It covers 80% of the surface of the country, but the size of this mass of ice is reduced every year.
Read more.

Between the fringes of Greenland’s gigantic ice cap and icy waters lies Kangerlussuaq’s magnificent tundra. It’s home to many terrestrial species including Greenland’s largest concentration of musk oxen, as well as...
Read more.

Info
Ship
Jun. 14, 2020
Ocean Atlantic
Our cruises are primarily sold through travel agents.
If you are interested in this cruise, please don't hesitate to contact us and we will help you get in touch with a travel agent.