With the arrival of September, Arctic weather patterns over Greenland quite often settle with clear skies and distant views. Beautiful dusts of snow on mountain tops, frosty grass in the mornings – and the supernatural wonders of Aurora Borealis on the night skies!

On this Ocean Atlantic voyage, you will enjoy all of that – plus Greenland, seen from both sides! From Kangerlussuaq in West Greenland we turn sharply to port side and south for Nuuk, Capital of Greenland. Onwards to the former mining town of Ivittuut and then through Prins Christian Sund to East Greenland. Skjoldungen Island is a place to marvel at majestic mountain scape – and possibly a tundra walk – before we enter the town of Tasiilaq. We are traversing Greenland’s back side or “Tunu”, as the Greenlanders call it.

Blosseville Coast rises 2000 meter from the sea with few or no landing spots, so we haste to get past and into the grandest fjord of them all, Scoresby Sund. Here, we will visit the Inuit settlement of Ittiqqortoormiit before venturing into the fjord for the island of Milne. Sheltered from the open sea, chances are good to see some of the abundant wildlife: Narwhals, polar bears and muskoxen. And the elusive Northern Lights!

Arrive by flight to Kangerlussuaq - embarkation

In the afternoon we board from Keflavik, Iceland, bound for Kangerlussuaq in Greenland.

Upon arrival in Kangerlussuaq, we will be transported to the small port located west of the airport, where our ship Ocean Atlantic, will be anchored. Zodiacs will transfer us the short distance to the ship, where you will be checked in to your outside cabin. After the safety drill, you will enjoy a dinner as Ocean Atlantic ‘sets sail’ through the 160-kilometer Kangerlussuaq fjord.

At sea; lectures on Greenland culture

Listen to a lecture from our experienced expedition staff, see a film about Arctic nature – or go out on deck to catch glimpses of migrating birds and hopefully some whales.

During the night, we have cruised north to reach Nuuk in the morning. As we enter the fjord Nuup Kangerlua we have fair chances of encountering the area's seasonal visitors: Humpback whales!

The world's smallest capital is in Greenland considered by many a mighty metropolis - a total of 17,000 people live here today, almost a third of the country’s population.

The area has been inhabited back to 2200 BC by pre-Inuit hunters. From year 1000 to 1350 AD, the Icelandic Vikings and farmers settled in South Greenland and in the Nuuk Fjord, while at the same time Inuit hunters of the Thule culture moved south from North Greenland. The Nordic settlers disappeared around 1350 AD, but the Inuit stayed, being far better equipped to hunt and survive in the tough Arctic nature.

Modern history of Greenland began in 1721, when the Norse missionary Hans Egede founded a permanent colony and trading station near Nuuk. In fact, Egede’s main purpose to return to Greenland was to convert the Catholic northerners to Lutherans, but soon after his arrival he realized the Norse had disappeared, a mystery yet unresolved.

In 1979, the Landsting (Parliament) was established in Nuuk, and the town was finally recognized as the country's capital.

In the afternoon, we will leave the capital and continue our southbound journey.

We reach South Greenland and expect the reach Arsuk Fjord with the small settlement of the same name. But the important call here is the former cryolite mine at Ivituut, the only place in the world where this very special mineral was mined until depleted 30 years ago. Used in aluminum melting, the mineral became strategically important, and forced the Americans to set up bases in South Greenland to protect the supply during WW 2.

Kap Farvel (Ummannarsuaq), or Cape Farewell, is renowned not only as Greenland's southernmost point, but also for its infamous, although mostly seasonal, gale-force winds.

We deliberately opt for a far more comfortable but at the same time more spectacular route, cruising via the inside passage through the Prince Christian Sound (Ikerasassuaq). This 60 km long waterway, from the settlement Aapilattoq in the heart of the fjordlands of South West Greenland to the Atlantic in the east.

The island of Skjoldungen is without doubt one of most beautiful areas in East Greenland. Situated at 63° N, the island is surrounded by narrow, steep fjords and glaciers, and with plenty of the cool, crisp and clean air of the ever present and nearby ice sheet. Still, we will find and experience a lush landscape and a milder climate than most would expect. Acclaimed Norwegian explorer Fridjof Nansen came here in late summer 1888 in search of a suitable ascension point for the first Greenland Icecap crossing.

Skjoldungen is also the name of an abandoned settlement, located on the southwest side of the island. Up to 100 people lived here until 1965, and some houses remain. We continue our journey to Dronning Marie Dal in the area's northwestern corner to get a closer view of its interesting flora.

This morning, we will approach the Island of Ammassalik and enter King Oskar's harbor with the Polhem Mountain (1003 m/3300 feet) to starboard. In front of us, we will see East Greenland's largest town, or Tasiilaq (2,000 inhabitants), which is the name used today, formerly it was known as Ammassalik (like the island). Although massive ice floes surround Tasiilaq making shipping traffic impossible most of the year, it has well-functioning educational institutions and health services.

Ammassalik was established as a colony in 1894, 10 years after the famed Gustav Holm's Umiaq expedition (open skin boat). The place where the town is located originally had no permanent settlement, but it turned out to be a perfect place to live because of its natural harbor and easy access to open waters.

We visit the beautiful local museum with the old turf hut, which undoubtedly is the place with the very best opportunities to buy some of Greenland's best crafts.

From Tasiilaq, we spend the rest of the day exploring the dramatic fjords and landscapes of the Ammassalik district.

The coastline from the Ammassalik area to Scoresbysund Fjord is among the most dramatic in the world. 2-3000 meter mountains rise directly from the sea in Denmark Strait, which is often filled with pack ice from the Arctic Ocean. The coast was inaccessible to both Inuit and European whalers, and it was not until 1899 that a small group of Danes led by Captain Amdrup managed to cover the 500 dangerous miles in a rowing boat.

Ocean Atlantic will pass the coast towards Scoresbysund in approximately 2½ days. Local wind and ice conditions determine route and possible landings. We hope to visit the abandoned settlement at the Kangerlussuaq fjord and go ashore at the dramatic Nansen Fjord.

At sea along Blosseville Coast

Possibly the most dramatic coast outside of Antarctica, the Blosseville is guarded by Greenland’s highest mountains and steepest fjords – and a belt of pack ice which before global warming would keep out any adventurous sailor for years. The recent decade has had warmer summers and much less ice which enables ice strengthened vessels such as the Ocean Atlantic to venture along the coast, on lookout for stunning wildlife, abandoned Inuit settlements and otherworldly landscapes.

After passing Blosseville Coast, we navigate the pointed Cape Brewster and arrive at the world's largest fjord, Scoresbysund.

Tomorrow we cruise further into the fjord and hope to do a landing before returning to the Denmark Strait and the open sea.

The amazing visual menu of the day is nothing less than the longest fjord in the world, Scoresby Sund. We will explore this fjord and hope to be able to offer kayaking and landings weather and ice conditions permitting.

Please note that all the outings and landings rely on weather, sea and ice conditions being favorable both for the ship to access the areas, as for the zodiacs and kayaks to maneuver under adequate conditions, ensuring the safety of all our passengers and staff.

For this reason, during moments of harsh weather and throughout the entire trip, Ocean Atlantic has excellent public areas, such as wellness/sauna, restaurant, bar and a library for our passengers to spend their spare time.  Our ship is staffed by experts in the field who will also share great lectures along the way, ranging from exploration history to biology, geology, ice and wildlife.

At sea; lectures and bird watching

As our time in Greenland concludes, we slowly approach the Icelandic capital, Reykjavík, and your Arctic adventure will have concluded. We enter Reykjavík in the morning and bid farewell to the vessel and crew. 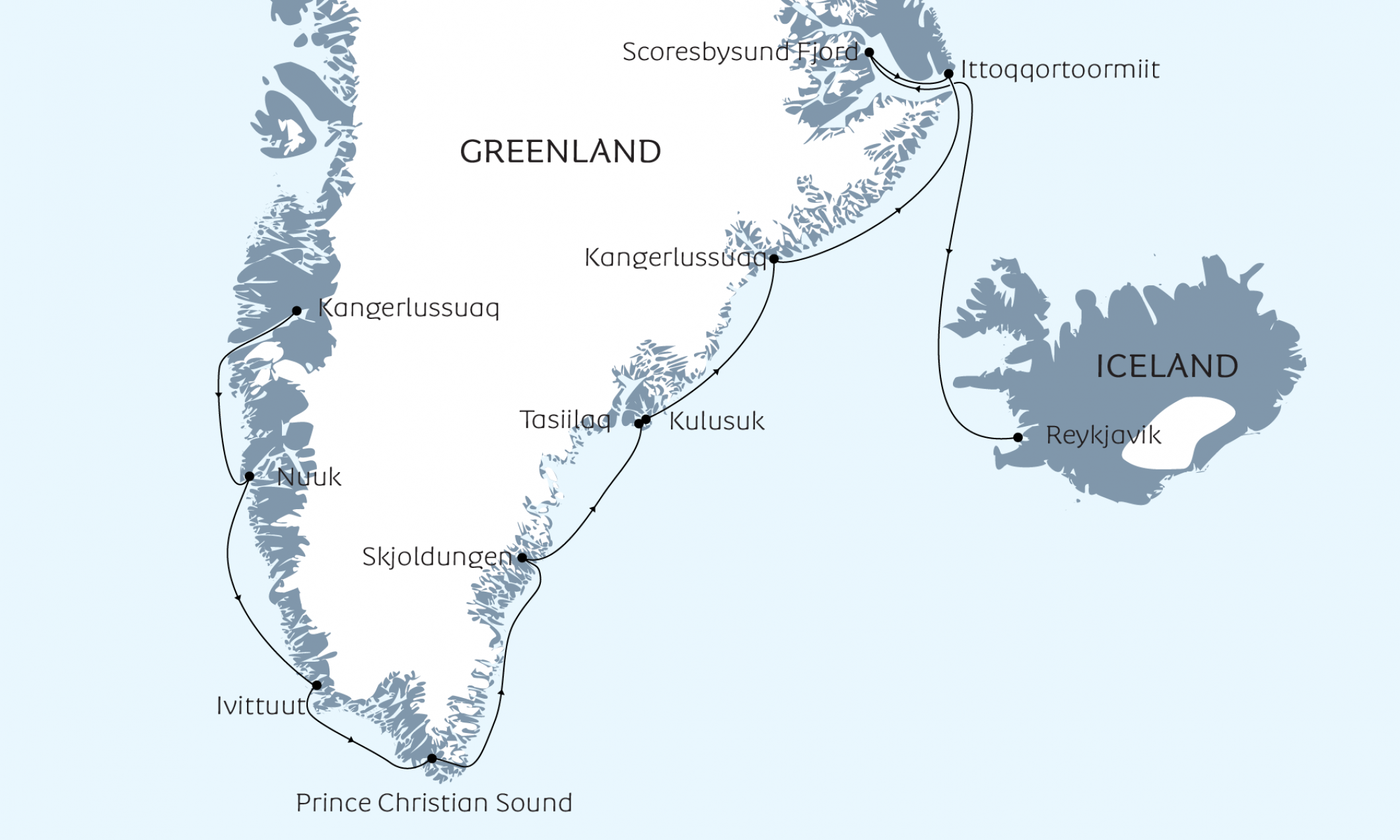 Full board on ship

Free coffee, tea and afternoon snacks on the ship

Extra excursions and activities not mentioned in the itinerary

Meals not on board the ship.

Beverages (other than coffee and tea).

Tips for the crew (we recommend USD 14 per person per day).

Anything not mentioned under 'Price includes'.

Town visit in Tasiilaq and Ittiqqortoormiit

Chance to see the Northern Lights

The opportunity to simply set foot on the Polar regions is a great experience, but to walk amid its white emptiness on a mini expedition is truly an unbeatable adventure.
Read more.

Glide through the waters and take in the royal grace of the icebergs, see the varied birds and seals, and maybe even the whales in their natural habitat under the supervision of experienced kayak guides, who will...
Read more.

Info
Ship
Sep. 13, 2021
Ocean Atlantic
Our cruises are primarily sold through travel agents.
If you are interested in this cruise, please don't hesitate to contact us and we will help you get in touch with a travel agent.