NORTHEAST GREENLAND - into the National Park

Discover one of the world's most beautiful, wild and pristine natural areas in the huge North Greenland National Park. On this unique Albatros expedition cruise, we will venture far from the usual tourist routes and visit places where only true expeditioners and scientists travel. Here we will experience unspoilt Arctic landscapes with good chances of seeing polar bears, whales and musk oxen.

Navigating the sheltered interior of the national park’s fjord system, we are likely to enjoy stable September weather with clear skies and distant visibility. Snow dusts the mountain tops, and the supernatural wonders of Aurora Borealis can be seen at night. We make landings at century old hunting stations in breathtaking landscapes, as our ship navigates north around Ella and Ymer Islands into Kejser Franz Joseph Fjord. On the southbound voyage we aim for the dramatic Blosseville Coast, whilst planning to make landings near the great fjord of Kangerlussuaq. The last day will be at sea, enjoying lectures from Albatros’ expedition team – or getting glimpses of sea birds migrating south.

This is a true Expedition Voyage, with landings in harsh and pristine nature, abundant wild life – and compulsory permits needed from both national park authorities and the Arctic military patrol Sirius, who acts as national park officers. Albatros Expeditions and our expedition team onboard have huge experience, having navigated these remote fjords for more than 20 years. There are few wilder, more magnificent and untouched places than the Northeast Greenland National Park! And few ships better suited than Ocean Atlantic for such a voyage.

Zodiac cruising in the national park

Beach landing in the national park

Landing at the national park

In September, there is chances to see the northern lights dance (aurora borealis)

In the afternoon, we board the Ocean Atlantic in Reykjavík and set our course northbound for Greenland.

On our way back towards open sea, we hope to make a landing at Myggbukta Hunting Station, which was the center of the Norwegian occupation of East Greenland in 1931. The occupation was found illegal by the International Court of Justice in Haag, and the Norwegian trappers had to leave. Cruising south along the coast, we aim for landings on Jameson Land, which is breeding ground for polar bears.

Possibly the most dramatic coast outside of Antarctica, the Blosseville is guarded by Greenland’s highest mountains and steepest fjords – and a belt of pack ice which before global warming would keep out any explorer for years. The recent decade has had warmer summers and much less ice which enables ice strengthened vessels such as the Ocean Atlantic to venture along the coast, on lookout for polar wildlife, abandoned Inuit settlements and otherworldly landscapes. 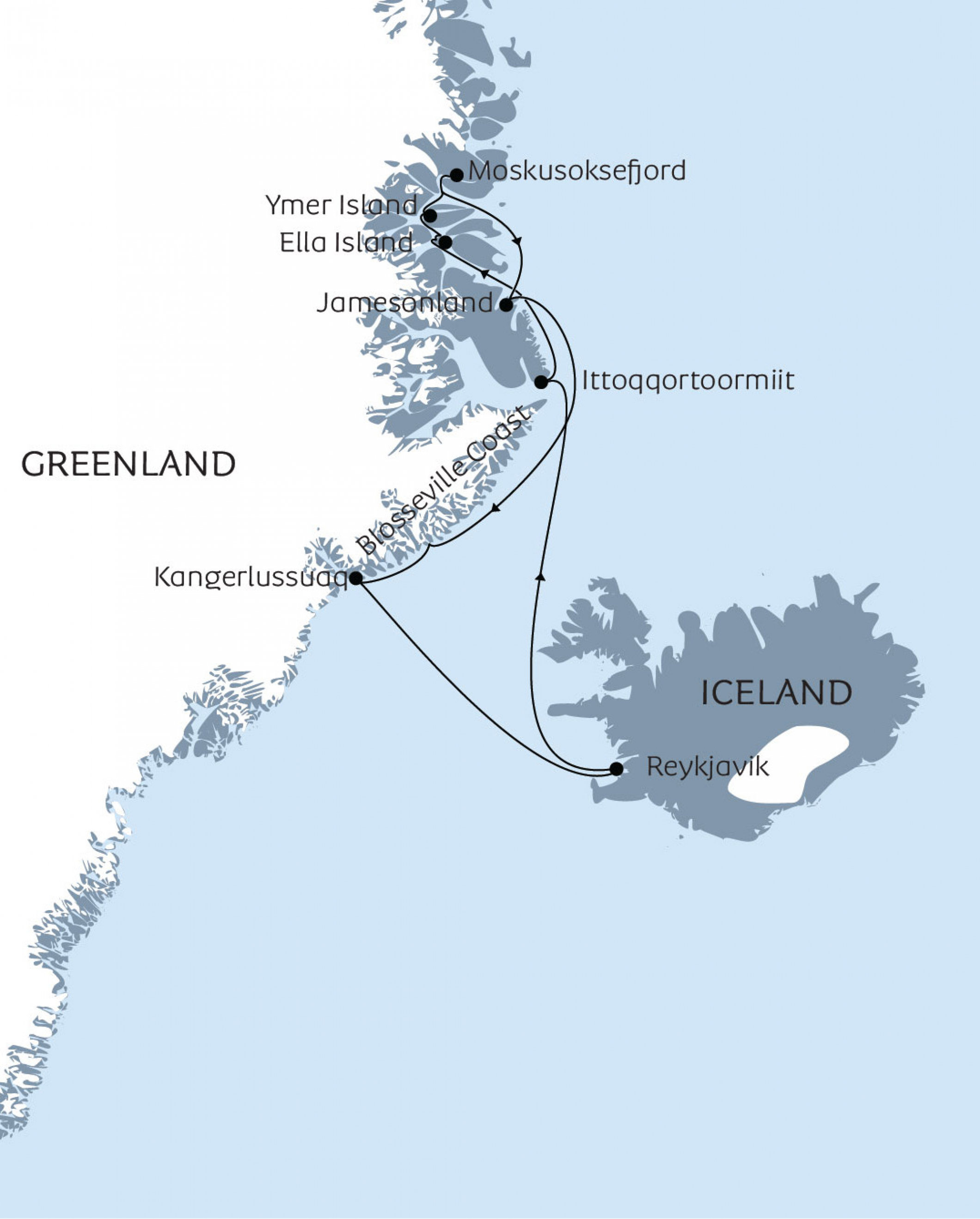 Info
Ship
Sep. 16, 2022
Ocean Atlantic
Our cruises are primarily sold through travel agents.
If you are interested in this cruise, please don't hesitate to contact us and we will help you get in touch with a travel agent.